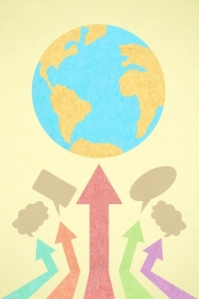 While we tend to think of being an activist as something political or for a large social cause (and that is true), it is not the whole picture. To me, an activist is someone that seeks change for the better. It is someone who does not spare her voice for what she believes is right, one that does not settle for the status quo.

And if you think of it, we can apply that to any realm of life.

Yesterday, my friend reached out after she faced a problem at work. She was frustrated because she felt her hard work on a particular project was dismissed, and that the way the decision was made was not logical. While she knew something could have been done, she felt she would not be heard again. “I really don’t care at this point,” she said.

I listened to her, and encouraged her to speak up if she believed what she was proposing was beneficial for her workplace. I knew she could be better than being apathetic and bitter. I also knew she was frustrated not because of her ego, but because she wanted things to be done right. She needed encouragement.

When we ended the conversation, I was still not sure how she was feeling. I told her to think about it, and let me know if she needed any help.

About an hour later, she sent me a draft of a letter to her boss, expressing her concerns with the process and what they could do to improve it. She asked me to proofread the letter before she sent it. She was challenging the status quo.

It is easier said than done, of course. In our personal activism, we are not an annonymous individual in a group. We need to stand up for ourselves. It takes courage.

We also can be effective by knowing our style of advocacy – are you the logical, convincing voice, backed up with facts and data? Do you alarm people of the urgency of the situation, and push for change? Or are you the warm, encouraging voice that helps people what they can be? Or are you the passionate voice?

We need a little bit of everything, of course, but by knowing our own strengths, we can maximize them. For instance, I always try to be optimistic, reminding people there’s always something we can do.

So next time you face a difficult situation, rather than pretending you don’t care or accepting it as “reality,” you may want to think, what you want to see happen. What can you do to make the change? Who can you inspire others to stand up with you? Possibilities are limitless, as long as you believe you can.

Information for Youth attending the 50K festival from Las Vegas

Pugwash seeks a world free of nuclear weapons and other weapons of mass destruction. Through our long-standing tradition of ‘dialogue across divides’ that also earned us the Nobel Peace Prize in 1995, Pugwash aims to develop and support the use of scientific, evidence-based policymaking, focusing on areas where nuclear and WMD risks are present. By facilitating track 1.5 and track II dialogues, we foster creative discussions on ways to increase the security of all sides and promote policy development that is cooperative and forward-looking.

Finished artwork and projects in progress

The Mothers (and Grandmothers) of Argentina