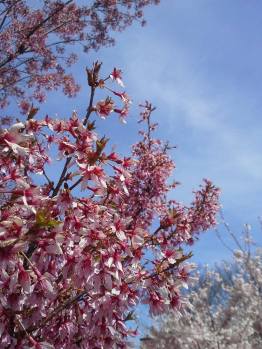 I am a little embarrassed to admit, but I was never passionate about environmental issues until very recently.  Don’t get me wrong, I do love nature. Growing up in a small town of Katano, in Osaka, Japan, I used to catch crabs in the river and chase dragonflies in the mountains.

But when it came to environmental issues, or being eco-friendly myself, I wasn’t very interested.  In retrospect, I believe the disconnect came from apathy.  I thought I was just one of billions of people on this planet, and my personal actions did not matter.  Reading articles about how much water we waste daily did not strike a chord in me.  Sure, I can be conscious, but there are so many others wasting more than I do, I thought.  It just felt like trying to put away fire with a few drops of water.

So what changed?  For one thing, I read an issue of Yes! Magazine, titled “The Human Cost of Stuff” last year.  I can’t precisely point out what it was about the issue that influenced me.  But flipping through the pages and reading articles like “7 Ways to Un-Stuff,” I remember, I felt empowered.  If anything, I think the magazine helped me connect the dots – between environmental issues, living simply, nonviolence, peace, and how I want to live my life.

Ultimately, I realized that the choice to become environmentally concerned is about me, and I should do so simply for myself. It did not matter if my small actions resulted in immediate changes or not.  There are actions I’ve taken in my life, only because I believed was the right thing to do, regardless of the expected outcome.  So why should this be different?

Having studied nonviolence for about half a year at that point, I was starting to see connections in issues I care about. Consumerism and other factors that lead to environmental degradation are based on shortsighted thinking that our own prosperity is more important than that of others or of future generations.  (It is perhaps because of my interest in interconnections among issues that I’m so thrilled to be Metta Center’s Roadmap Fellow – which is a topic for another post in the future.)

It is also based on the idea that more material possessions we have, happier we are.  But I know that is not the case. Although civilization and prosperity is often tied to our material wealth, just like the video by Steve Cutts depicts below, I think we often become slaves to the desire to have more.

I now see that everything is interconnected.  The products we consume, for instance, are not just isolated objects or mere results of the production and distribution processes – they are manifestation of ideologies and values. And I need to carefully choose what those values and ideologies are – through the way I take the shower, buy clothes and brew my coffee.  It is about how I want to live my life.

This approach seems to work for me, because it prevents me from the trap of being judgmental toward other people’s choices. It is just my personal choice, and it represents who I want to be.  It is also less prone to certain skepticism against being eco-friendly, such as the one I used to suffer from.  People may say what I do everyday does not matter.  In return, I say, it doesn’t matter if it matters or not.

Of course this view may evolve in the future, just like a seed planted continues to grow to a tree. But at this point, I am not writing to convert you; I just want to share my personal story, in case someone may find it useful for your personal journey.

2 thoughts on “How I Became an Eco Convert”

Information for Youth attending the 50K festival from Las Vegas

Supporting the Council of Mothers of May 2 in Odessa, Ukraine

Pugwash seeks a world free of nuclear weapons and other weapons of mass destruction. Through our long-standing tradition of ‘dialogue across divides’ that also earned us the Nobel Peace Prize in 1995, Pugwash aims to develop and support the use of scientific, evidence-based policymaking, focusing on areas where nuclear and WMD risks are present. By facilitating track 1.5 and track II dialogues, we foster creative discussions on ways to increase the security of all sides and promote policy development that is cooperative and forward-looking.

Finished artwork and projects in progress

The Mothers (and Grandmothers) of Argentina